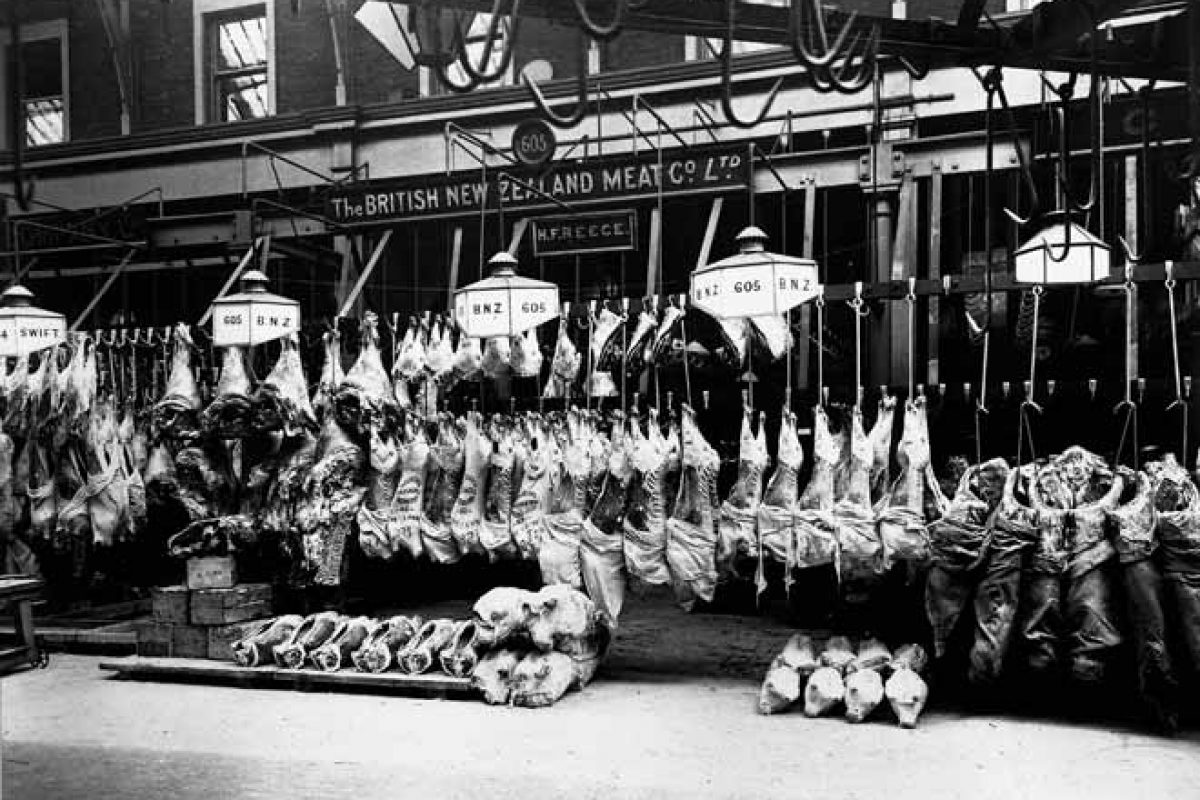 Prior to World War 1, New Zealand’s agricultural production and the farming enterprises responsible for them were largely in balance. Most towns had their own dairies, real ones, that made and supplied their communities with beautiful milk (in glass bottles), butter to die for, and cream that made any home baker’s scones taste better. Margarine wasn’t even visible on the horizon. There was artisanal cheese as well. Food was wholesome, natural, unprocessed, delicious and contained high levels of nutrition. Superb lamb was a birthright, and veges and eggs often came straight from the back yard. Bread was wholesome, unprocessed, and came from the local artisan baker. Nothing came in plastic bags.

A regenerative colleague of mine recently shared a story with me about how he was telling his 93-year old mum about all the cool things we were planning to do on farm. She reportedly said, “That’s nice son, that’s exactly what we used to do in the 1930s when your father and I were growing up.”She reportedly went on to tell my colleague about the ice deliveries and the wonderful meat from the butcher that was delivered by Bob’s young fella. The non-chemically impacted meat arrived wrapped in brown paper. The fresh asdaily milk arrived in glass bottles on the front doorstep. There was no plastic in sight, no industrial scale farming and the distribution of profit was equitable and fair from farmer to customer.

The question of course is how did we go from that superb system to the disconnected mess we have now? In today’s world, things are very different. Most people don’t know their suppliers, and few know where anything comes from. Supermarkets have very deliberately disconnected us from our food. Even the staff that work in supermarkets don’t know their suppliers or where anything comes from. I asked the ‘meat specialist’ behind the supermarket’s posh meat counter the other day where the $59.00 per kilo Scotch Fillet came from. He said it came from Processor X. Great…thanks, I’ll give it a miss. Frustrating, disappointing, but let’s move on for now.

At this time, on the farming side exporting was well established, particularly in the sheep industry. Its successful pursuit initially enabled by some very clever, innovative, New Zealanders and New Zealand companies in Dunedin. Their entrepreneurship had allowed Kiwis back in the day to enjoy one of the highest standards of living in the world. Life was very, very good and so was our health and the health of our environment. There were some early signs of the train wreck that lay ahead, but at the time, in the moment, it was all good. No one had linked ripping out all of the trees for pasture to feed grazing animals to climate change or its impacts.  Talk of melting polar ice caps, sea level rise, increasingly damaging storms, warming oceans and very annoyed polar bears was still a long way in the distance. Climate change, what climate change. Nothing to see here, move along.

Of course, if it isn’t broken, don’t fix it. This led to the creation of a mindset that rationalized a mantra that suggested, “If it’s working so well, why not do more of it.”  Inevitably, export strategy eventually met scale and New Zealand hasn’t been the same since. Whilst Britain may have deserted New Zealand farmers in the early 1970’s, joining the European Union to stave off economic demise, the scale mindset Britain had helped to foster persists to this day. It is embedded in the psyche and DNA of many farmers, and by default it still influences farming decisions and operations today.

Many of course will disagree and that is fine, but what else can explain the tenuous financial performance of some of New Zealand’s major commodity supplying red meat and dairy cooperatives? Horticulture, fishing, forestry and other platforms have not been immune to the vagaries of commodity trading either. Venison, salmon and mussels have all suffered. The export at scale strategy idea that has brought us to the present day has some question marks over its business model. Doing more of the same under the mantra of transitioning-to- value reeks of myopia too, and history is littered with stark warnings of failing to learn from the past.

Does New Zealand have the right strategies for the future? I’m not sure, there are some super innovative companies out there and many are doing some fantastic things, but are there enough of them? In the end, farmers will choose their own paths and time and consumers will arbitrate. In 2050, and 2100, New Zealanders and others will deliver the verdict as they look back with the benefit of hindsight. They may have some interesting insights about commodity driven industrial farming. I would suggest time is not on our side and the premium consumers we say we covet today are currently having a good, long, hard look. These days they have plenty of choices and substitutes are growing rapidly, taking market share in markets traditional farming once owned. The more questions they ask, the harder it is going to get and you can’t hide a brand story in a plastic bag…even a really nice one.

In response, New Zealand producers of all persuasions may need to start asking some very hard and potentially very unpalatable questions about how to respond to disruption and change in their environments and in their markets. In reality, and there is always a reality, it would appear that many of New Zealand’s farmer owned co-operatives have and are struggling. Why? Their financial non-performance over the last decade strongly suggests they have created operational environments that are allowing capital rich enterprises positioned upstream in the supply chain to reverse integrate. In other words, our customers are buying us. One might also argue they are buying our silver with profits that by rights should have been ours. A cynic might say the current cooperatives are architecting their own demise.

So, back to the David and Goliath discussion. Which food system currently feeds and nurtures your loved ones? Which system provides the best nutrition? Which system is best for the planet? People? Animals? Our future? Make no mistake, looking after our land means looking after ourselves, and sadly, so far, we haven’t proven to be the greatest custodians of our shared and very rare, blue planet. On this point, it’s harder to disagree. What’s broken and how badly it’s broken is another debate. Fixing things might not be easy either as the primary production space in New Zealand is often mired in politics, bureaucracy, tradition, controversy, emotion, bias, lobbying and self-interest, a very powerful cocktail, which locks in behavior and negatively impacts the ability to respond to competition and change.

Scientists, ecologists, poets, writers, artists, meat lovers, chefs, vegetarians, environmentalists, climatologists, activists, governments, nutritionalists, doctors, farmers, industry bodies and the widely and globally concerned have been debating for decades. Most have an immovable position and that usually comes with a self-interested or political bias. Neither are particularly helpful to effective collaboration, which makes disruptive change even more challenging.

Are we listening? Is anyone listening? Maybe reflect for a minute or two and answer those two questions for yourself. Of course, this is a very emotive space and there is conflict even among the concerned. In essence though, there appears to be two key pathways or approaches to tackling the future. Option one is to continue with an industrialized and extractive approach. This strategy aims to provide volume and scale for commodity trading. At the beginning of the last century this was a successful strategy for New Zealand. It isn’t any longer. Option two, is transitioning to regenerative and sustainable farming practices. This strategy is consumer driven and aims to provide premium quality produce to discerning consumers. Most marketers would understand that in markets where one product looks very much like another, price is the clearance mechanism. This is how commodity markets work and that is where most of New Zealand’s export products are traded. When we play this game, the price is never set by us and we will always be…the price takers.

The late Sir Paul Callaghan and his co-writing colleague Shaun Hendy stated in the opening chapter of their seminal Get off the Grass publication that, “New Zealanders work harder and earn less than most other people in the developed world.” Is this really where we want to be? Industrialized farming born over a century ago worked right up until it didn’t…now, something has to give. What will that be?

In finishing, I point to what Sir David Attenborough and many others have been desperately trying to explain to us. We have one planet, and one planet only. We all need to share and care for it and it contrary to many current industrial agricultural practices, it is not infinitely expandable. Our beautiful home cannot be supersized to suit rampant population growth. Estimates suggest the global population will reach 10 billion by 2050. It was 3 billion in the 1960s. It is currently 7.7 billion. There are 353,000 new babies joining us each and every day. Christchurch’s population is 374,000 people for those wanting some perspective, so we’re nearly adding a Christchurch sized population to the planet every day. That kind of increase is going to be quite a challenge and as they say, when it rains, it pours…or doesn’t. Will peak population synchronize with peak climate change? You will need to ask the experts. The key question still remains though. Who will you back? David, or Goliath?