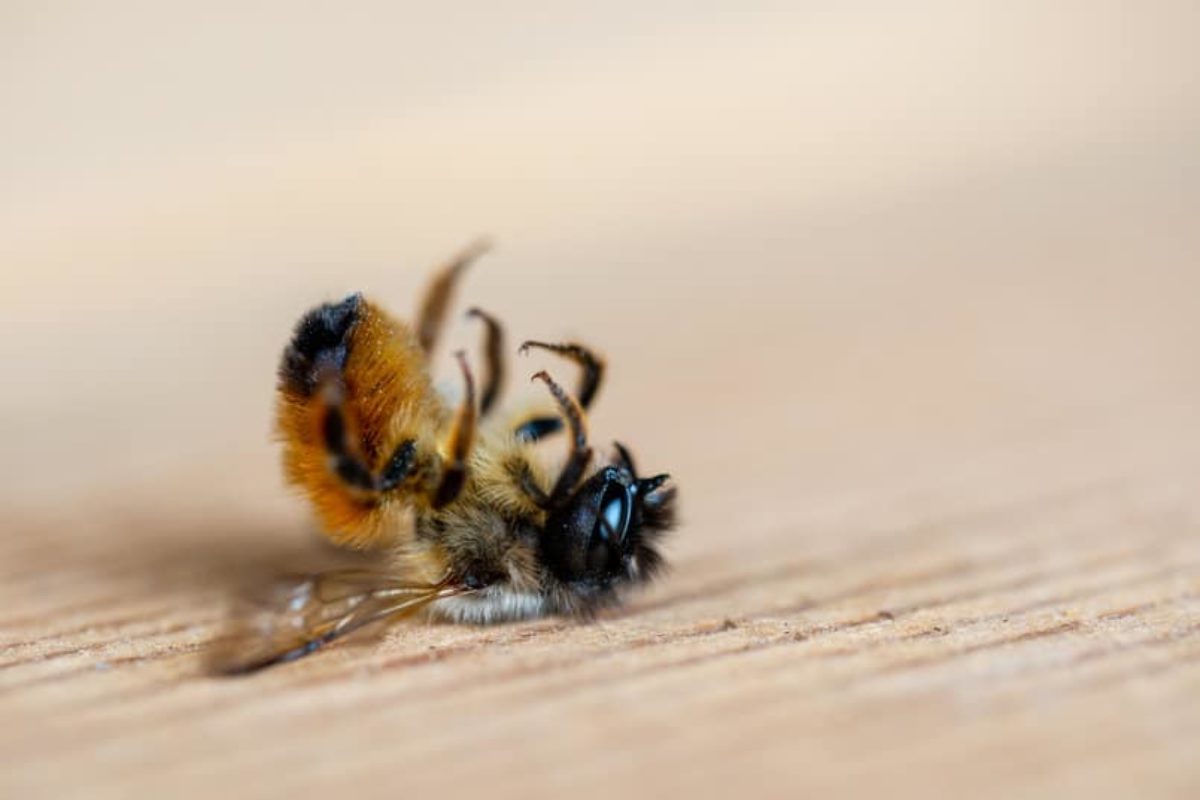 A recent piece on TVNZ has generated a much overdue debate around glyphosate. You can read the article here ‘It’s causing massive problems’ – Beekeeper says nothing can be done to stop NZ bees picking up traces of weed-killer glyphosate

So why is this a big deal?

The obvious point is that most of our markets have a zero tolerance to glyphosate in food.

What is glyphosate and how does it work?

Glyphosate is the main ingredient in the common herbicide Roundup and other look alike herbicides. Glyphosate represents the most widely used herbicide nationally and globally.

As a reminder, glyphosate is a chelator. It locks up cations so they are not available to plants. It was actually developed in the 1950s to clean calcium deposits from pipes and it was discovered that in locking up cations within plants it interferes with the shikimate pathway which is critical to health and survival of plants, so plants die.

Many herbicides act as chelators, so this in itself is not so unusual, but other herbicides are fat soluble whereas glyphosate is water soluble.  This means that when it is put into the environment there is no way of getting it back!

It can’t be subtracted out of the ecosystem the way fat soluble products can. As a water soluble product it is able to pass through the protective barriers of the body including the gut lining and the blood brain barrier directly exposing the body and most importantly the brain directly to the effects of the toxin.

This would not be such a big deal if glyphosate is innocuous to mammals as per claims… but more on that later.

I won’t go too much into the complex mode of action but will highlight that one of the direct actions of glyphosate is to inhibit the production of amino acids in plants. Amino acids are important in life as the building blocks of proteins. There are 26 of them and you can consider that they are like the letters of the alphabet; combinations of them make up proteins just like combinations of letters make up words which can be short or long, simple or complex.

There are approximately 200,000 proteins in the human body which are critical to our genetic makeup and all body functions. Any disruption to the supply of amino acids and these building blocks of life will affect our health, but there are 9 critical amino acids which are like the vowels of the alphabet. Just as there are vowels in virtually every work, there needs to be at least one of these 9 essential amino acids in every protein. These ‘vowels’ are only available in our diets from plants and biota. Depriving us of these essential amino acids has a major impact on our health.

Promoting something to spray on our food chain which compromises our ability to make the critical building blocks of life is insanity. This is compounded by the fact that over 85% of our DNA is microbiological and we now know a healthy microbiome supports our health.

Glyphosate is an antibiotic, it kills bacteria and fungi, it is the most used antibiotic in the world with annual use of over 1000 times all other forms of antibiotic combined!

So even if the claim that there is no direct impact on the health of mammals is correct, these above 2 points alone show that there is major consequential damage to human and mammalian health through the wide use of glyphosate in our gardens, parks and farms.

Our food today contains only a small fraction of the nutritional content of even 40 years ago due to the impact of glyphosate. This has consequences on diet and shows up as a variety of dietary disorders.

Glyphosate does have a direct effect on mammalian tissue. Research has shown a close link between the major chronic toxic diseases of man and the use of glyphosate globally since the time glyphosate was first licensed.

The following graphics outline some of the deeply disturbing insights from scientific research into the effects of glyphosate on humans and other mammals. 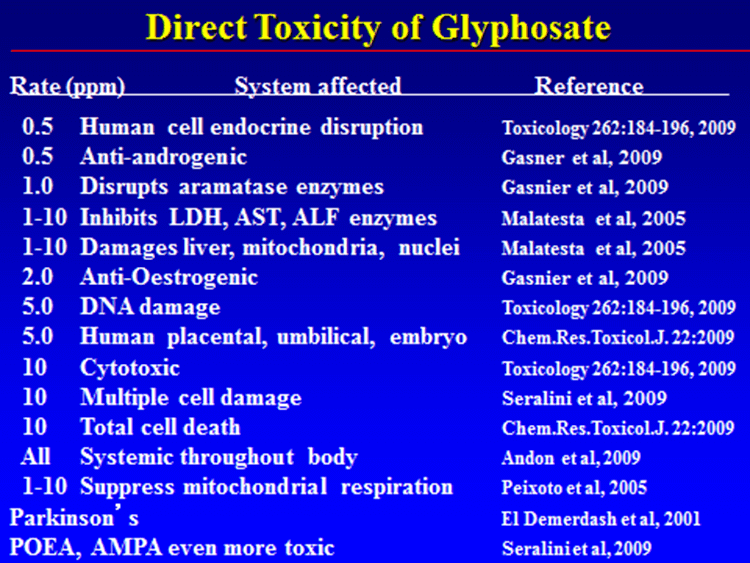 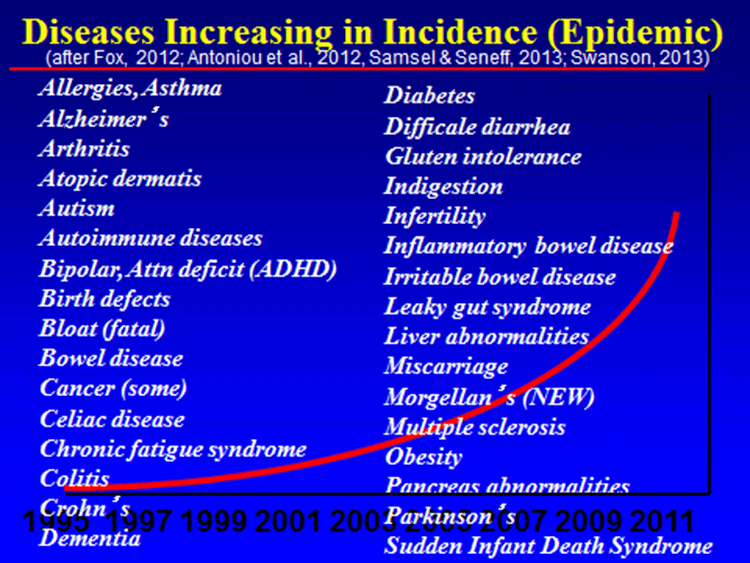 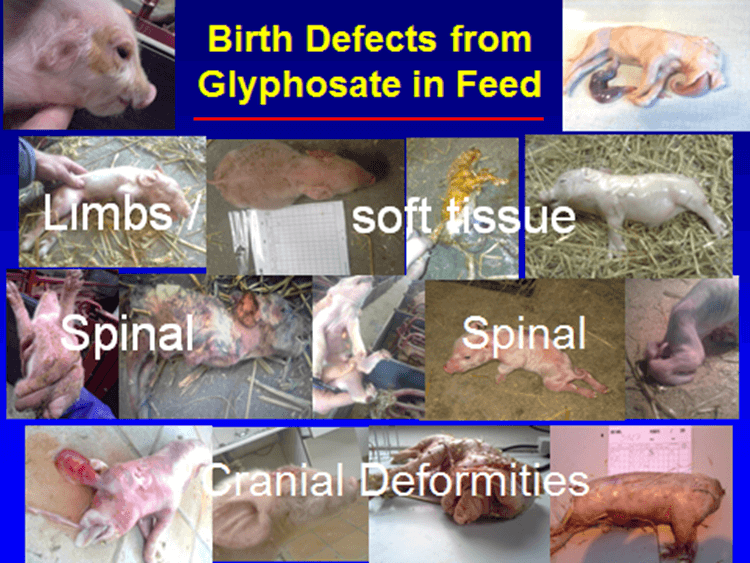 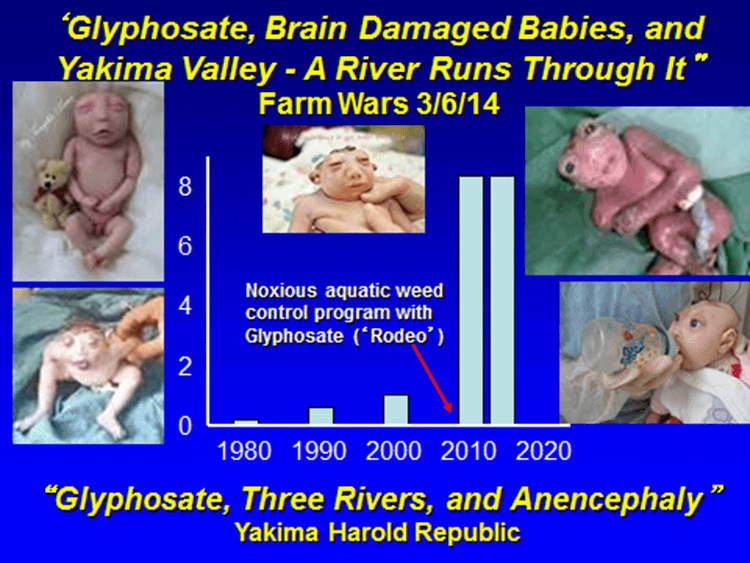 While we have known about the potential impact of glyphosate from these studies it has still been difficult to argue cause and effect until the recent work by Dr Zac Bush in the US.

This work revealed the direct impact that glyphosate has on the protective physical barriers which make up our first line of defence, this includes the lining of our upper respiratory systems, the lining of our gut, our internal vessels and most critically our blood brain barrier. The damage to the lining of the gut causes a leaky gut and explains the raft of chronic disorders that are a consequence.

The direct damage to the brain explains the explosion of degenerative nervous disorders especially autism. One in 50 kids in the US was diagnosed on the autistic spectrum in 2013; it is predicted to be 1 in 3 by 2030!  A similar story explains the massive upsurge in cancers.

Is glyphosate needed for our agricultural economy?

We in NZ tend to shrug our shoulders at this information and continue to justify the widespread use of Roundup as important to our agricultural economy. Yet the consequences of it are apparent and recognised as per this statement in the news of whole hives dying when exposed.

We actually have no real record of how much is used in New Zealand and no requirement to record use. I estimate approximately 25% of intensive dairy land is sprayed at least once per year as part of a regrassing and cropping programme. Many forestry operations spray glyphosate at least once and sometimes more often immediately after harvesting to suppress weed growth. It is used routinely by councils on road sides, parks and reserves.

Research by Johal and Huber has shown less than 1% of Roundup sprayed is actually taken up by plants and weeds, the balance finds its way into the soil or water system and contaminates underground water, rivers and sea. It evaporates to clouds and is in rain and in the air we breathe.

So why are we surprised we find glyphosate residue in honey? Have we considered it is also likely to be in many of our other key export products?

The need for change

How can we allow a product with such a risk to our health, our economy and our futures to be so widely used or even to be used at all?

Yes, there is some debate that there will be an impact on our agriculture if use is prohibited, but the work we have been doing with regenerative management in agriculture, organisations and business has shown we can farm profitably without glyphosate with better outcomes across the triple bottom line of environment, society and economy.

I have great respect for the regulators and agribusiness people who look after our industry and I am sure they approach their work in what they believe to be the best interests of our country. I can not however understand how they can continue to support the unregulated use of this poison in the face of increasing global evidence as to its toxicity and harm and the constantly increasing resistance from global consumers.

It is putting our own health and that of the NZ economy at major unjustified risk.

Maximum Residue Limits (MRLs) indicate the maximum levels at which residues of agricultural compounds and veterinary medicines may be legally present in food for sale. The purpose of an MRL is to minimise risk to public health by ensuring that the methods of food production keep agricultural compound residues in food to safe levels.

MRLs are primarily a tool for monitoring the use of agricultural compounds against good agricultural practice (GAP). GAP is the generally-accepted means of producing safe primary produce without overuse of pesticides. Thus, GAP is about ensuring that chemical residues in food are as low as practicable, without compromising the ability of the chemical to successfully do what is intended.

In the New Zealand (Maximum Residue Limits of Agricultural Compounds) Food Standards 2015 issued under the Food Act 1981 there is a MRL of 0.01 (at the limit of quantification) for glyphosate in fruit. For all other uses the default MRL of 0.1mg/kg would apply.

MPI generally uses established World Health Organization’s Acceptable Daily Intakes (ADIs) or the Potential Daily Exposure established by the EPA for food when assessing food safety risk. Both of these parameters are estimates of the quantity of a particular compound in a food which can be consumed by a person on a daily basis over an entire lifetime, without causing any health effects. They are expressed as how many milligrams of the compound can safely be consumed per kilogram of body weight every day for an entire lifetime. The ADI for glyphosate is 1 milligram per kilogram of body weight. Exposure to glyphosate through consumption of food should not exceed this ADI. The acceptable daily intake for glyphosate is high (meaning of low toxicity), and the chronic dietary intake exposure for glyphosate has been assessed to be less than 1% of this acceptable level of exposure over the lifetime for both adults and children. Glyphosate’s toxicity and dietary risk has been reviewed in detail by the World Health Organization and the Food and Agriculture Organization of the United Nations which concluded that it is of very low toxicity. MPI has adopted this conclusion in its assessment of the dietary risk of glyphosate to the New Zealand public. However, as a result of the recent review of glyphosate by the International Agency for Research on Cancer, glyphosate is to be re-evaluated in 2016 by the European Food Safety Authority and the Expert Task Force established by the WHO to update that risk assessment to include all new data generated since the previous evaluation. MPI will take into account the re-evaluation when it is published.

The Environmental Protection Agency (EPA) in NZ has established tolerances for glyphosate on a wide range of crops, including corn, soybean, oil seeds, grains, and some fruits and vegetables, ranging from 0.1 to 310 ppm

Note that these limits exceed the levels identified in global studies to cause serious damage to health. This work has been carried out by highly reputable scientists including Professor Emeritus Don Huber, Professor Gilles-Eric Seralini, Dr Stephanie Seneff, Dr Zac Bush and many others.